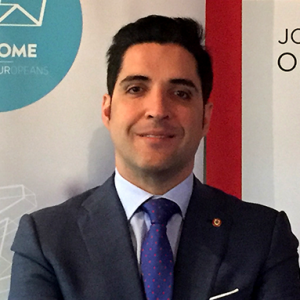 Emilio Corchado is a full Professor at the University of Salamanca in Computer and
Automatic Science. He is also the CEO of Startup OLÉ Accelerator and the main
organizer of the international entrepreneurship event, Startup OLÉ, which will
celebrate its 6 th edition in 2020 from 9 th until 11 th of September.

He has been coordinator of the European project WELCOME and member of the SEP
project, both under the H2020 Framework Program, and currently he is a partner of
MY-GATEWAY and SEP 2.0 projects, both H2020 projects of the European Commission.
Emilio Corchado is an innovation expert hired by international organizations such as
the European Commission, the Grant agency of Czech Republic, the Spanish National
Agency for Assessment and Forecasting and has collaborated with SMEs and new
companies in the innovation field in about 40 projects. He has patented software
models and he owns the IP of more than 10 ICT tools and models.

Currently, he is also president of COESI (Spanish Confederation of Engineering
Societies),he was the president of the IEEE Spanish Section during the years 2014-15,
and has actively contributed to several current projects in the EU, including
SOFTCOMP, IT4Innovation, ICT Action COST IC1303, Emacs, and IntelliCIS NISIS.

Startup OLÉ is one of the technological events with the greatest
projection in Europe, and one of the three events that lead the ranking of Spanish
entrepreneurship. The 5 th edition of Startup OLÉ, which took place from 26 th to 28 th
March in Salamanca in 2019, will bring together more than 30,000 attendees from 120
countries, 850 startups and 500 speakers, with an investment portfolio of € 50 billion.

Startup OLÉ 2019 has the support of the European Commission – Startup Europe, the
Central American Integration System (SICA), the City Hall of Salamanca and the
University of Salamanca. Startup OLÉ has become a key platform to connect national,
European and international ecosystems.

All Sessions by Emilio Corchado

Emilio Corchado
We use cookies to ensure that we give you the best experience on our website. If you continue to use this site we will assume that you are happy with it :)OKRead More