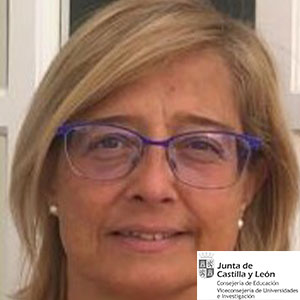 PhD in English Philology and a diploma in German Philology, full professor of English Philology at the Faculty of Philosophy and Letters at the University of Valladolid (UVA) and at the University of Salamanca. She has been a professor at Hertfordshire universities in England; Mount Holyoke College, in the United States; Nihon and Kyoto, both in Japan; Antwerp Catholic, in Belgium; St. Denis, on the Reunion Island; Maynoooth, in Ireland; Saarbrücken, in Germany; Reijkyakik, in Iceland; Plovdiv, in Bulgaria; Colraine, in Northern Ireland; UMass, in Massachusetts, United States; and McGill, in Montreal, Canada. Until now, UVA general secretary, where she has also been responsible for the Erasmus program; director of the Department of English Philology; vice-dean for International Relations at the Faculty of Philosophy and Letters and vice-rector for Institutional and International Relations. She has also performed the functions of coordinating the Japan area at the Center for Asian Studies and secretary of the Spanish Association for Japanese Studies.

Pilar Garcés
We use cookies to ensure that we give you the best experience on our website. If you continue to use this site we will assume that you are happy with it :)OKRead More